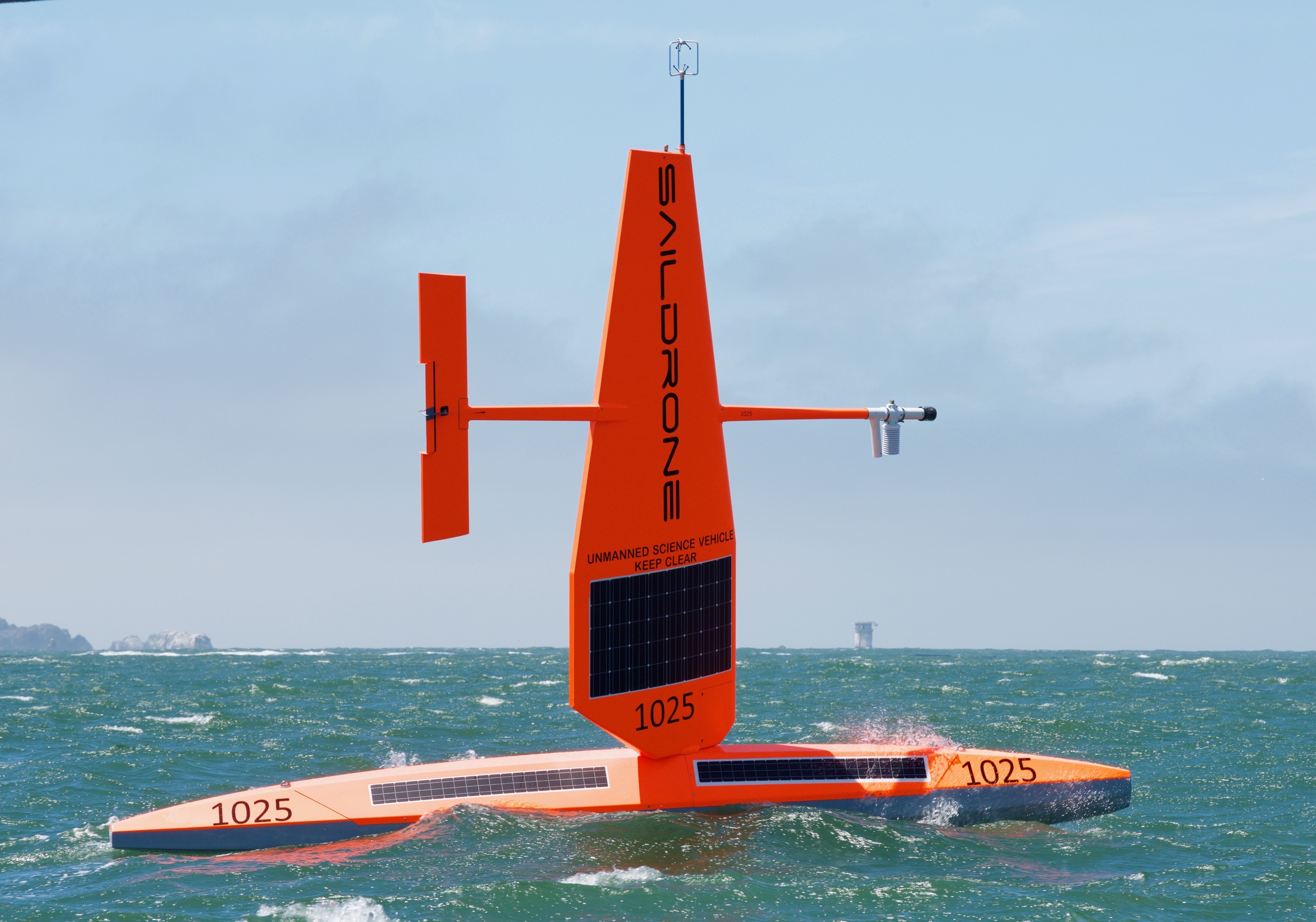 Saildrone believes in revolutionary new approaches to ocean science and we're committed to enabling new and innovative science using our technology. Each year, we award 30 days of saildrone-powered data collection, free of charge (equivalent to $1,000,000 worth of research ship time), to the most impactful mission submitted during the year.

Past awardees have demonstrated innovative use of autonomous technology to address big questions. Read about their missions below.

Interested scientists can submit an initial proposal for data collection using Saildrone’s interactive application portal. Finalists will be asked to submit a detailed mission plan for review by the judging panel.

Submissions are closed at this time. Please check back later in the year. 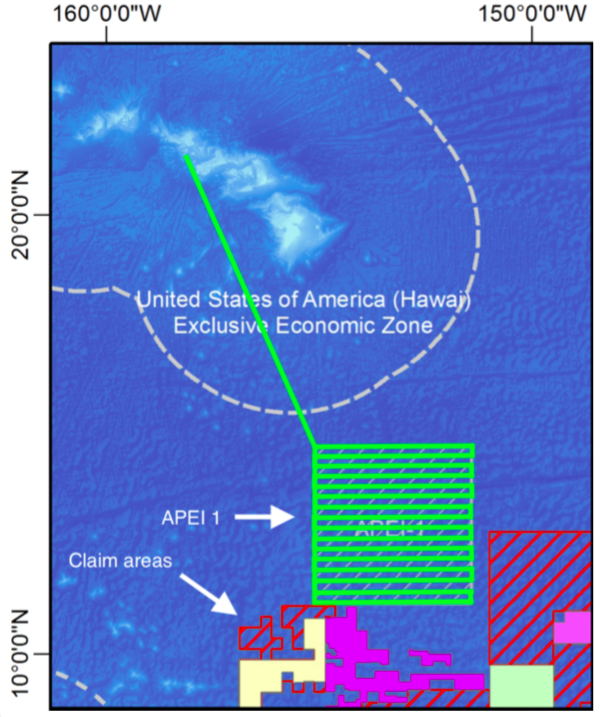 The third annual Saildrone Award 30-day mission was awarded to a team led by Jessica Perelman and Dr. Jeffrey Drazen at the University of Hawai'i to study environmental patterns and drivers of micronekton vertical distribution, total biomass, and vertical migratory behavior at the western end of the CCZ starting in late 2019.

The major objective of this project is to build a baseline of deep scattering layer depths and behaviors across the CCZ, an area designated for future deep-sea mining. Given the clear importance of mesopelagic migrators in carbon and nutrient cycling and as a forage base for commercially important predators, changes to these baseline biological parameters induced by mining-related sediment plumes could have major implications for ecosystem services in the CCZ.

The team will use a saildrone equipped with a SIMRAD WBT Mini (EK80) echo sounder, which will allow the analysis of nautical area scattering coefficients (NASC) from acoustic backscatter. These will be used as proxies for acoustically measured biomass (Klevjer et al. 2016), as well as scattering layer depths and thicknesses and diel vertical migratory patterns. By building an initial database of vertical dynamics and water column biomass prior to industrial-scale mining, we can begin to understand how the natural variability of these biological phenomena is influenced by environmental drivers such as oxygen and productivity, as these parameters will likely change as a result of increased sediment in the water column.

This project addresses a key question regarding the impact of industrial deep-sea polymetallic nodule mining, which will commence as early as 2022 in the Clarion-Clipperton Fracture Zone (CCZ)—a 6 million km2 area in the central North Pacific Ocean. It has long been understood that small fish, shrimps, and squids (micronekton) at midwater depths form deep ocean sound scattering layers that can undergo diel vertical migration (Trueman et al.2014). In general, scattering layer depths vary by region based on oxygen and light penetration in the water column. These fauna actively transport carbon to depth, and they provide a forage base for top predators such as tuna and billfishes and thus support pelagic fisheries. Yet, many of these animals remain understudied and it is unclear how the patterns and behaviors of mesopelagic populations will change in response to environmental disturbances. 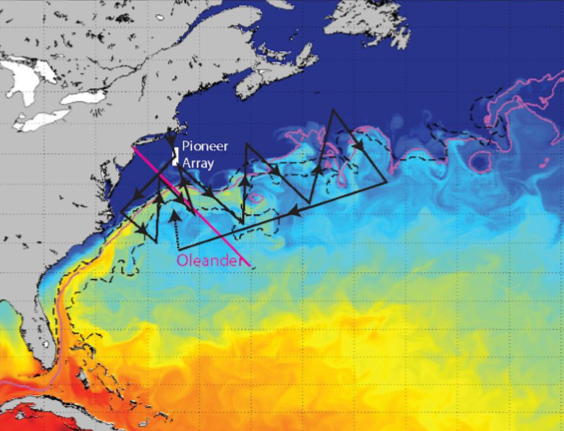 The second annual Saildrone Award 30-day mission was awarded to a team led by Dr. Jaime Palter at the University of Rhode Island to study Western Boundary Currents, starting in early 2019.

Western Boundary Currents, for example, the Gulf Stream, endure the most intense air-sea heat exchange and the strongest CO2 uptake in the world ocean. Because of the short space and time scales characterizing their variability, they present tremendous observing challenges that are not easily addressed with traditional methods. Thus, their contribution to the global ocean carbon budget remains poorly quantified. Saildrone provides a platform capable of long-endurance, high-speed, accurate lower atmosphere, and surface ocean measurements.

The team will use a saildrone to measure wintertime surface heat and CO2 fluxes across the Gulf Stream. Despite a rich history of observations, the proposed mission will provide the most detailed data on the wintertime evolution of CO2 in the Gulf Stream from Cape Hatteras North Carolina to a position about 1,000 kilometers offshore. With these observations, the scientists will answer a number of open questions about the rate and location of the CO2 uptake in the Gulf Stream and nearby regions, the driving mechanisms, and the response to anthropogenic emissions. Moreover, we will use the lessons we learn in the Gulf Stream to evaluate the capability of Saildrone to provide an observing strategy for more remote and chronically under-sampled Western Boundary Currents in other parts of the ocean.

This project addresses a key scientific question with immense societal value: Quantifying the ocean carbon sink is a grand challenge for oceanographers in a time of global change, and the Western Boundary Currents are frontier regions for such quantification. The work with Saildrone to quantify CO2 uptake and understand its key controls in the Gulf Stream will provide a necessary proof-of-concept test of a novel observing strategy. In so doing, Dr. Palter hopes to provide a path forward to help close the global carbon budget. 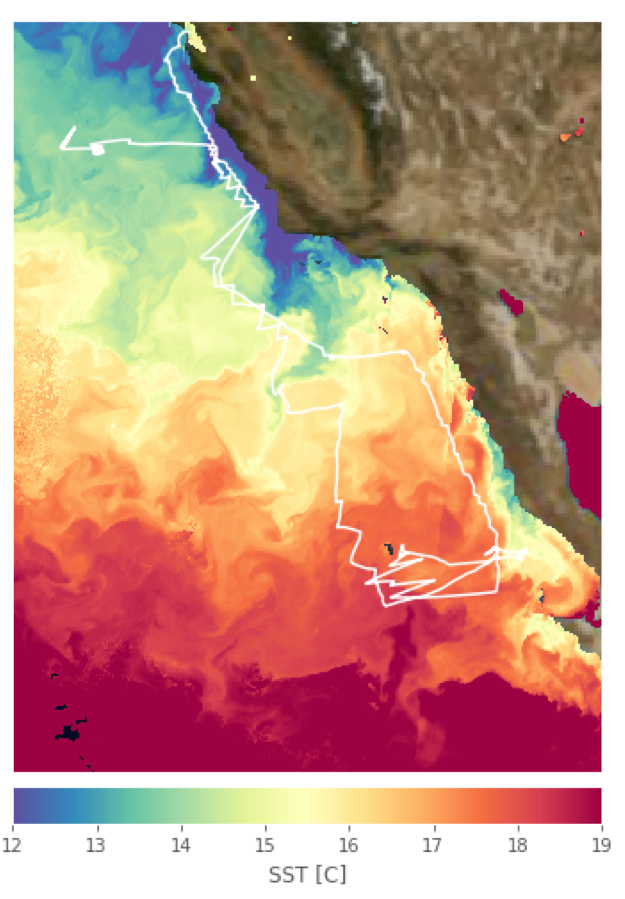 In 2017, Saildrone awarded its first 30-day data collection mission to a coalition of 20 scientists, led by Dr. Chelle Gentemann of Earth & Space Research. The mission was extended by 30 days by a generous grant from The Schmidt Family Foundation.

During the 60-day cruise, the Saildrone USV sailed down the California and Baja coast, lingering at eight NOAA buoys for triple validation using USV, buoy, and satellite observations. Near the southern-most point of the cruise at Guadalupe Island and again at the end of the cruise near San Francisco, the USV repeat-sampled some fine frontal features. The 60-day cruise track is shown to the left with NASA’s NPP VIIRS satellite sea surface temperatures in the background.

The scientific objectives include studies of upwelling dynamics, air-sea interactions including frontal regions, diurnal warming regions, and ocean ecology. The validation objectives include establishing the utility of Saildrone measurements for inclusion into ocean models, validation of glider observations, and validation of satellite-derived fluxes, sea surface temperatures, ocean currents, and wind vectors. The USV completed the mission track successfully; the team has been evaluating the data and is beginning analysis of the results. One of the most exciting aspects of this data is the across-wind and along-wind sampling of the strong fronts off of San Francisco to examine the exchange of heat across the air-sea interface.